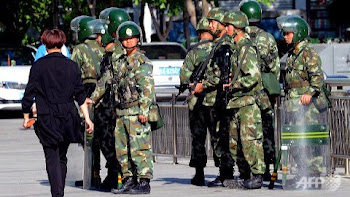 BEIJING: Thirteen people were shot dead in China’s restive Xinjiang on Saturday after they drove into a police building and set off an explosion, a regional government website said.

Three police suffered injuries but no other casualties occurred, the report said, without providing further details. It was unclear if the attackers used one or more explosive devices.

Xinjiang, a vast and resource-rich region in China’s far west which is home to the mainly Muslim Uighur ethnic minority, has faced a series of violent attacks in recent years.

Authorities have vowed to crackdown in recent weeks and announced a number of arrests and sentences following several high-profile attacks.

In May, 39 people were killed, along with four attackers, and more than 90 wounded when assailants threw explosives and ploughed two off-road vehicles through a crowd at a market in the regional capital Urumqi.

In March, attackers went on a stabbing spree at a railway station in the southwestern city of Kunming that left 29 people dead and 143 wounded.

That incident, one of the first to take place outside Xinjiang blamed on militants from the region, was dubbed China’s “9/11” by state media. Woman in her 80s attacked by giant flood rat