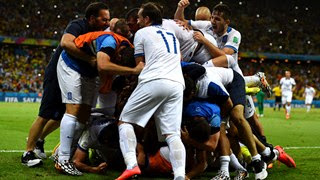 Incredible drama unfolded in Fortaleza when Georgios Samaras converted a stoppage-time penalty to secure Greece a 2-1 victory over Côte d’Ivoire to set up a Round of 16 clash against Costa Rica at the FIFA World Cup™.

A truly topsy-turvy encounter appeared to be finishing in the African challengers’ favour until they conceded a crucial spot-kick in the closing seconds, providing their opponents with a chance to progress and maintaining their frustrating record of not qualifying from a group stage at the tournament.

Côte d’Ivoire duo Kolo and Yaya Toure were both named in the starting XI just days after the tragic passing of their brother, Ibrahim.

Didier Drogba, meanwhile, was included from kick-off for the first time in the competition.

From the opposition dugout, Fernando Santos opted for three changes in a must-win encounter.

After a tightly-contested opening, the Greek rhythm was disrupted by the misfortune of two injuries; Panagiotis Kone was forced off and replaced by Andreas Samaris, before goalkeeper Orestis Karnezis had to submit and Panagiotis Glykos entered the fray. But, incongruously, Santos’ charges would soon begin to pepper the Ivorians’ goal in search of a tangible foothold in the match.

Indeed, woodwork was shaking on 32 minutes, when Samaras knocked a diagonal ball into the path of Jose Cholevas, who showed too much speed over the turf for Kolo Toure. The Olympiacos man’s shooting technique matched his pace, but the well- struck drive from distance in the right channel agonisingly bounced off the crossbar and away to safety. Boubacar Barry smartly handled a subsequent free-kick from Georgios Karagounis.

Three minutes before the break, Greece struck. Cheick Tiote was lackadaisical in possession, handing control straight to substitute Samaris. The 25-year-old correctly selected a one-two with near-namesake Samaras as his best option, took the return pass and calmly lifted a side-foot finish over the oncoming Barry and home to drastically alter the situation in Group C.

The fledgling moments of the second period featured a flurry of activity.

Dimitrios Salpingidis nodded back a delivery to the far post, with the ball staying out of the net through a combination of a deflection and the frame of the goal. Tiote, keen to make amends for his earlier error, worked Glykos with a crashed strike from around 25 yards, though the ‘keeper was comfortable.

Barry, on the other hand, was a spectator when Lazaros Christodoulopoulos shimmied into range for a strike – the No16’s eventual pummel drifted harmlessly wide, however.

But the Côte d’Ivoire custodian produced an important, acrobatic stop to keep out a thump from the right edge of the penalty box by Salpingidis shortly after Salomon Kalou threatened momentarily when he scampered inside from the left wing, but his shaped curler was slightly too high and a touch wide to settle in the top corner. At the other end, Karagounis took a more
straightforward route by simply smashing the ball from fully 30 yards and was left
bemoaning his luck when the piledriver rattled against the crossbar.

With little over a quarter of an hour left, though, the tide turned again. An impressive passing move brought space to create for Gervinho, who found substitute Wilfried Bony inside the area and the Swansea City striker was coolness personified in expertly clipping in the equaliser despite pressure converging from all angles.

There was a sharp intake of breath for Côte d’Ivoire supporters when Salpingidis fired a devilish cross across the six-yard box, but Serge Aurier narrowly avoided contact and a guaranteed own goal.

But their nightmares became reality when Giovanni Sio upended Samaras inside the area in the 92nd minute and the striker stepped up to lash the spot-kick home and spark Greek celebrations. Man freed after 35 years on remand for manslaughter