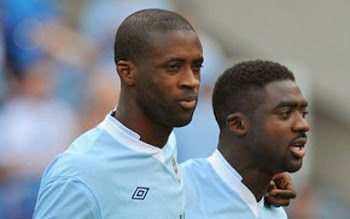 Kolo and Yaya Toure’s younger brother, Ibrahim, has passed away on Thursday 19th, June, in Manchester at the age of 28, according to a statement from the Ivorian Football Association.

The football Ivory Coast federation President (FIF) and the Executive Committee announced to the entire family of Ivorian football the death of Toure Oyala Ibrahim, the younger brother of Toure Kolo Abib and Toure Yaya Gnegneri, which happened on the 19th of June in Manchester (England).

The president of Football Ivory Coast Federation and the Executive Committee asked Ivorians for their prayers as the players from the Ivory Coast national team, and the entire delegation in Brazil, show their support to the Toure brothers and their whole family.

Ibrahim Toure, 28, played as a striker throughout his career, most recently with Lebanese team Al-Safa SC.

In order to show their heart felt support for the Toure’s family, Manchester City also sends their condolence message to the family stating that Ibrahim was a regular visitor to Carrington and was a popular figure among the staff and players and was extremely close to his two older brothers.

Although, the cause of his death was not announced, but the British media reported that Ibrahim had died after a battle with cancer and had been receiving treatment in Manchester. Medical Outreach Is Dear To My Heart – Suncity Radio CEO