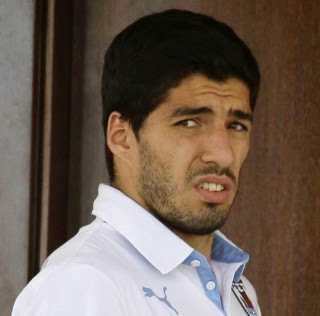 Luis Suarez has been rapped with a nine- match international suspension and a four month ban from ALL football for biting Giorgio Chiellini.

The Liverpool and Uruguay striker has also been fined 100,000 Swiss francs (£65,708) and banished from all football stadiums.

Suarez was caught on camera sinking his teeth into Chiellini’s shoulder during Uruguay’s 1-0
win over Italy, making this the THIRD biting offence of his career.

MORE: Suarez could miss up to 15 games for Liverpool

‘Such behaviour cannot be tolerated on any football pitch, and in particular not at a Fifa World Cup when the eyes of millions of people are on the stars on the field.

‘The Disciplinary Committee took into account all the factors of the case and the degree of Mr Suarez’s guilt in accordance with the relevant provisions of the Code.

The decision comes into force as soon it is communicated,’ said Claudio Sulser, chairman of the FIFA Disciplinary Committee. Castro is not dead – Kaywa Milo who? A confused nation with no sense of direction