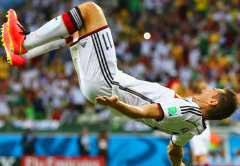 The veteran striker came
off the bench in the 70th minute in Fortaleza on Saturday and had an almost immediate impact, prodding home at the back post in trademark fashion to take his finals tally to 15, level with legendary Brazilian Ronaldo.

After a turgid first half, the game burst into life six minutes after the break when Mario Gotze finished Thomas Muller’s wonderful right-wing cross.

Knowing that defeat would leave them on the brink of elimination, Ghana were sparked into action and turned the match around through Andre Ayew’s header and then Asamoah Gyan’s clinical finish.

Gyan’s goal sparked action from Germany head coach Joachim Low, who introduced Klose in place of Gotze, and – as he has done so often in the past – the 36-year-old showed his predatory instincts with 19 minutes left to earn his side a point.

The draw means that Germany remain top of Group G on four points, although they could be overtaken by the United States should Jurgen Klinsmann’s side beat Portugal on Sunday.

Ghana fielded three changes from their 2-1 defeat to the United States and made a bright start, Gyan firing an effort over the crossbar under pressure from Per Mertesacker in the seventh minute.

Christian Atsu brought the first save out of either goalkeeper six minutes later, stinging the palms of Manuel Neuer with a 25-yard drive.

One of Ghana’s alterations saw Fatawu Dauda come in for Adam Kwarasey, but the replacement keeper was not tested until the 18th minute, comfortably holding a low curling effort from Sami Khedira.

As the first half wore on, Ghana became more assured, Sulley Muntari thumping in a piledriver from 30 yards which Neuer had to repel with a flying save high to his right 12 minutes before the break.

The Germans went ahead six minutes after the interval, Gotze nodding Muller’s pin-point cross home in unusual fashion – via his knee – from 12 yards with Dauda motionless.

Ghana were behind for just three minutes though, Ayew glancing in Harrison Afful’s right-wing delivery to bring his side level for the second game in succession. And nine minutes later the African side had turned the match on its head.

Philipp Lahm, usually so reliable on the ball, squandered possession for the Germans and after a perfectly weighted pass from Muntari, Gyan whipped a finish across Neuer and into the net for his fifth World Cup goal, the joint highest tally for any man representing an African nation, along with Cameroon’s Roger Milla.

As Germany pressed for an equaliser, they left themselves susceptible on the counter-attack.

Substitute Jordan Ayew raced away down the left before firing a weak shot at Neuer with his team-mates better placed.

However, with an upset looking to be on the cards, Klose stepped up to the mark.

The Lazio man brought Germany level with 19 minutes to play, reacting first to prod the ball home at the far post after Benedikt Howedes had glanced on Toni Kroos’ left-wing corner.

Klose even spurned a late chance to win it, wasting a golden opportunity to claim the landmark outright when he fired wide from the edge of the box in the 90th minute.

But it was still enough to earn him a place in the record books, and his side a point, although there were worrying scenes for Low at the end with Muller bleeding profusely at the final whistle after banging his head against the shoulder of John Boye late on.