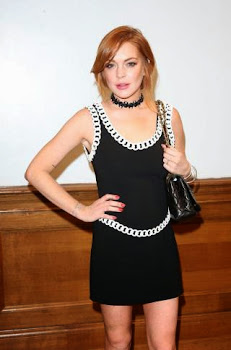 Lindsay Lohan gave staff at a posh London department store a shock by parading around naked.

Oh, LiLo, when will you ever learn?

According to The Sun, The Mean Girls actress was shopping for designer frocks at Selfridges in Oxford Street when she nipped out of the changing area to run around the shop floor au naturale – as you do.

‘Lindsay took some items into the changing room,’ a source told the newspaper.

‘Halfway through, she ran out of the room with nothing on and was chased by members of staff who were trying to cover her up. She was laughing her head off and literally giving staff the run-around as customers looked on.

‘Lindsay was booked in for a personal shopping experience with a posh brand at the shop later that day, but it didn’t happen.’ Awks.

The 27-year-old is set to make her west end theatre debut later this year in a revival of play Speed-the-plow.

Hopefully she knows that the saying is you’re suppose to visualise the audience naked rather than be naked yourself should any pre-show nerves kick in.