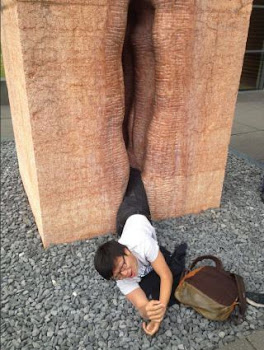 A student has reportedly had to be rescued after getting stuck inside a giant stone vagina.

The exchange student from America is believed to have climbed inside the marble sculpture in Tubingen, Germany, on Friday afternoon, for a dare.

However, once inside he found he was stuck.

Five emergency vehicles and 22 firemen are believed to have eventually eased the unnamed man out but not before someone took a picture and posted it on social media site Imgur.

The man, whose legs got wedged at the bottom of the art installation, was eventually freed and was said to be ‘really embarrassed’.

Erick Guzman, who took the images and posted them online, said: ‘I was there!!! He just wanted to take a funny picture.

‘The fire department was not really amused, and he was really embarrassed.’

The sculpture is by a Peruvian artist called Fernando de la jara and has been at the Tubingen University in the German town for the last 13 years in the Institute for Microbiology.

The sculpture is called Pi-Chacan, which is said to mean ‘love making’ in Peruvian-Indian.